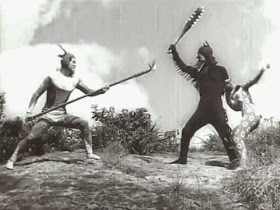 While googling The Fantasy of Deer Warrior to see if I could find any information to augment that found on its very limited Hong Kong Movie Database page, I came across, right near the top of the results, the post that my friend and podcast co-host Tars Tarkas wrote about it back in November of 2008. This was at a time when the film was still tantalizingly M.I.A. and consists merely of its poster and a couple paragraphs concerning what little was known about its contents. It was enough, however, to put me--along with, I imagine, many others—on a long and fruitless hunt for it. This was far from the first time that Tars had done a thing like this, and I couldn’t help imagining him cackling as he once again gleefully scattered the seeds of nerd obsession across the internet.

Of course, like so many of these cinematic chimeras lately, The Fantasy of Deer Warrior ultimately mocked all of our efforts by eventually turning up for free on the internet. Here is my report: 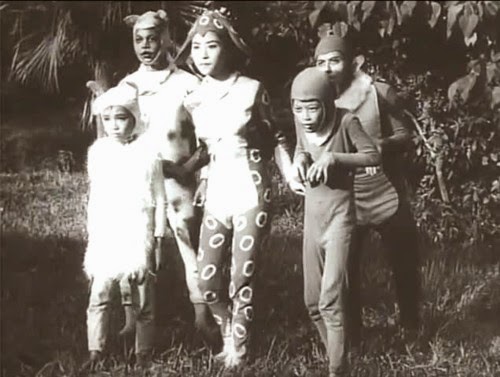 Where some films have a host of international locations and a lavish effects budget, The Fantasy of Deer Warrior has a forest and some animal costumes that look as if they were fashioned from footy pajamas. You might think that the novelty of that would wear thin rather quickly, but there are a couple of things about Deer Warrior that enable it to maintain our interest. For one, unlike Syd & Marty Krofft (or Roberto Rodriguez, for that matter), director Cheung Ying does not conceal his actor’s faces under all-enveloping, football mascot type heads, but instead leaves them exposed, peeking out from under cowl-like headwear that resembles those animal hoodies all the hipsters were wearing a couple years ago. This allows us to enjoy the contrast between the earnest expressions they wear as they gamely grind through the high melodrama of Deer Warrior’s plot and their adorable, flippity-floppity ears. 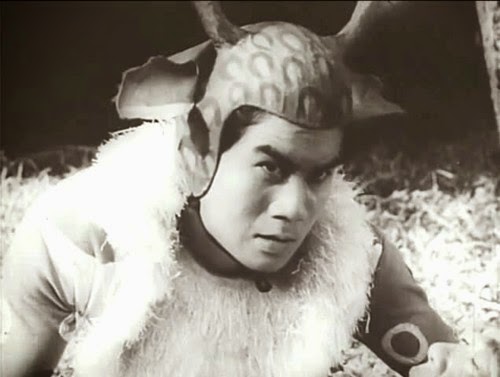 The visibility of the actors’ faces is also of interest because some of those faces are familiar ones, in particular that of the Deer Warrior himself, Ling Yun, who went on to star in a lot of Shaw Brothers movies, including the previously reviewed King Drummer, as well as a number of Chor Yuen films. I also should add that, while Deer Warrior is reportedly a children’s film, it, like a host of other Asian children’s films, sports a number of elements that would prompt senate hearings if they appeared in a Western children’s film of its era. These include a hero who kills a captive enemy in cold blood, a character named Erotic Fox (Lam Lam) whose animal costume is considerably more abbreviated than the rest and whom performs a hoochie koochie dance to the Champs’ “Tequila” at one point (she is also referred to in one exchange as having a “dirty smell”), and, if the English subtitles on the version I watched are to be believed, some instances of salty dialogue. 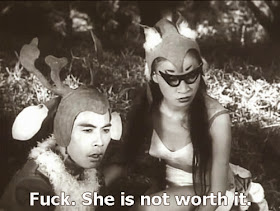 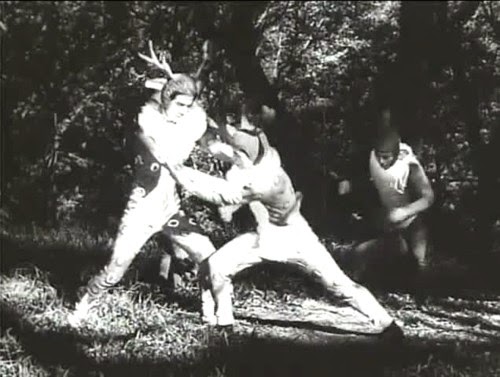 As the movie begins, fauna fatale Erotic Fox is maliciously stoking the already seething rivalry between prize bucks Warrior Deer and Sika Deer, who are both in love with the virtuous Miss Deer (Hsu Yu). While the two are brawling, word arrives from home that Warrior Deer’s family has been brutally attacked by a band of wolves lead by Evil Wolf (Li Min-Lang). Warrior makes his way back just in time for his father to die in his arms, at which point he swears blood revenge upon the wolf clan. And if you have just noted that this plot is identical to that of countless martial arts films, congratulations. Please keep in mind, however, that all of these people are wearing animal costumes. 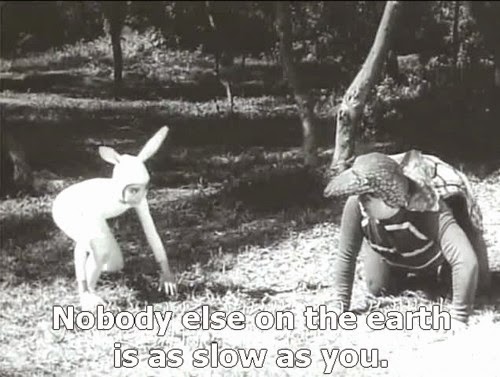 From this point on, Deer Warrior proceeds in a manner right in line with its stock revenge plot, albeit with a couple of interesting digressions. Time is taken out, for example, to re-enact a couple of Aesop’s fables, in particular “The Tortoise and the Hare” and “The Boy Who Cried Wolf”. There are also a couple of songs. Other musical interludes make use of enough needle-dropped western schmaltz for an entire Lawrence Welk episode (the idyll that the wolves shatter, for instance, consists of a bunch of kids in bunny and lamb costumes frolicking about to a syrupy instrumental rendition of “Jingle Bells). 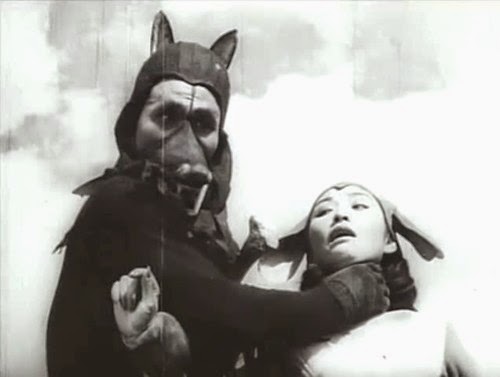 Meanwhile, as the wolves pitilessly massacre all of the defenseless bunnies, lambs and baby goats in the forest, Miss Deer, who has been sidelined by her paramour’s revenge binge, becomes the subject of Evil Wolf’s unwanted attentions, with all of the kidnapping attempts and narrowly avoided rapes that that entails. Amid this, we are propelled through The Fantasy of Deer Warrior by our ever greater curiosity as to what bizarre representation of animal kind will be rolled out next. The population of this forest is indeed a very diverse and counterintuitively harmonious one, with apes living peacefully with and cozying up to goats, rabbits and a host of other critters. It is with great relish that we wait to see which of this menagerie will be revealed next. 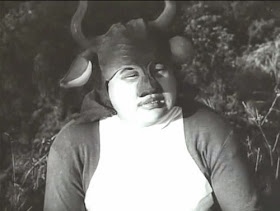 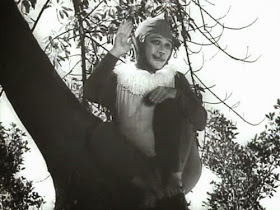 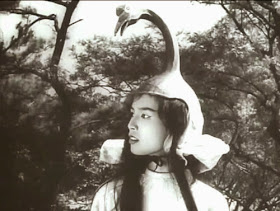 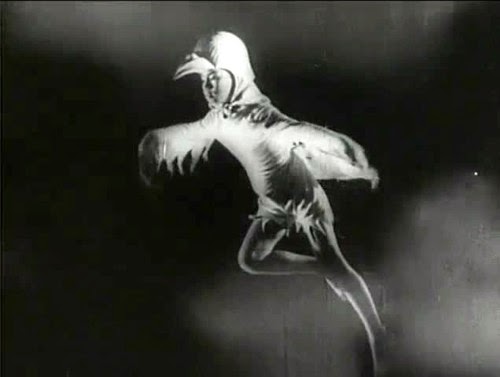 My favorite of these, I think, are the birds that are used as messengers by the various animals, relaying their love notes, ransom demands, hate mail and other missives from one end of the forest to the other. These are, for the most part, portrayed by children in bird costumes who fly by means of some pretty squirrely process shots that represent Warrior Deer’s sole stab at special effects. Evil Wolf is also a treat, resembling, as he does so closely, the wolf from the Mexican Caperucita Roja movies. 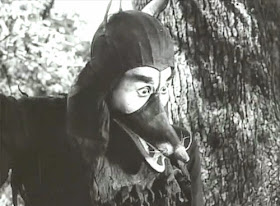 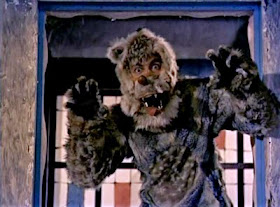 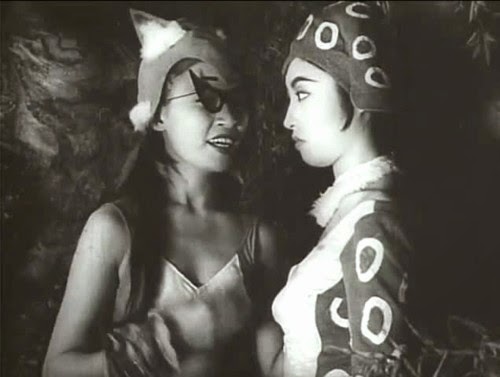 I don’t know why exactly, but, for some reason, I expected The Fantasy of Deer Warrior to be more operatic in nature—perhaps to be something in the vein of a Chinese Peter and the Wolf. But, no, it really is just a bunch of actors in animal costumes variously tussling around in the forest until the 90 minute mark comes around. Not that there’s anything wrong with that, mind you. I have indeed watched many films that consisted of much the same elements, though without the benefit of animal costumes. One is tempted to wonder just how much many plodding martial arts programmers could be improved upon if this gimmick were employed—if they featured, say, Carter Wong dressed as a cow, Lo Lieh dressed as a giraffe, or Bolo Yeung dressed as a buffalo? Sadly, such things are to remain, like the Deer Warrior, consigned to the realm of fantasy. 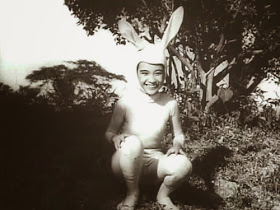 PLEASE NOTE: I do not sell, trade, upload or otherwise provide copies of the films that I review on this site, so please don’t ask.

Please, no questions about where to download films or subtitle files. If you are asking about the availability of a reviewed film on DVD, please make sure that you have first conducted a simple search of the film’s title on Google, eBay, and Amazon. That usually works for me.

Everyone else, BRING IT ON!